Improving Referral Rates to Prevent the Onset of Proliferative Diabetic Retinopathy
Over 5 years, patients with severe nonproliferative diabetic retinopathy (NPDR) have a 75% to 81% chance of progressing to proliferative diabetic retinopathy (PDR).1 In fact, a large 2021 retrospective analysis from the American Academy of Ophthalmology’s Intelligent Research in Sight (IRIS) Registry by Wykoff et al. showed that patients newly diagnosed with severe NPDR or PDR had a 3.6 and 4.0 times greater risk, respectively, for sustained blindness at 2 years than patients newly diagnosed with mild NPDR (Figure 1).2 Thus, these findings indicate that patients who initially present with an advanced stage of diabetic retinopathy (DR)—either severe NPDR or PDR—are at a higher risk of sustained blindness, even with today’s effective treatment options.2

Figure 1. Risk of blindness with DR.2

The results from the IRIS Registry analysis underscore the importance of detecting DR early to preserve vision and reduce the substantial risk for future blindness. Despite the many challenges that exist surrounding patient compliance, optometrists can play a vital role in educating patients on the importance of compliance with referrals, recommended appointments, and treatment.

Moderate NPDR is characterized by the DRSS as findings that include intraretinal hemorrhaging, exudates, or cotton wool spots that are less extensive than moderately severe NPDR. Severe NPDR is characterized by the presence of pathology as generally stated in the “4-2-1” rule. The 4-2-1 rule is defined as any of the following without signs of PDR: severe intraretinal hemorrhages and microaneurysms in each of the 4 quadrants, definitive venous beading in 2 or more quadrants, and moderate intraretinal microvascular abnormalities (IRMA) in 1 or more quadrants.

Multimodal Imaging Is Key to Accurate Staging of Pathology
Identifying diabetic pathology is crucial to correctly classify the severity level of DR. However, accurate staging of DR can be clinically challenging, particularly in uncooperative patients or those with significant media opacities. Multimodal imaging technology, particularly wide-field and ultra-widefield fundus imaging, is an important diagnostic tool that can aid clinicians in efficiently and accurately identifying pathology. Additionally, this technology is valuable in detecting and documenting DR lesions not only in the posterior pole but also in the peripheral retina.

Optical Coherence Tomography Angiography Highlights Vascular Abnormalities
Even with the best clinical skills using indirect ophthalmoscopy, microvascular abnormalities may be quite subtle on a clinical fundus examination alone. More concerning, these abnormalities, such as microaneurysms, retinal nonperfusion, or mild IRMA, may be undetected and undiagnosed. Mid-peripheral retinal nonperfusion is a major concern because of its high risk of progression to PDR. Therefore, its presence may warrant earlier treatment because retinal ischemia is nonreversible and may progress. Fortunately, wide-field optical coherence tomography angiography (OCT-A) helps optometrists to readily identify microvascular abnormalities.

Additionally, with its robust dataset, OCT-A can reliably differentiate between IRMA and preretinal neovascularization. IRMA are dilated telangiectatic capillaries within the retina, whereas preretinal neovascularization occurs on the retinal surface at the vitreoretinal interface. En face OCT-A isolates data at the vitreoretinal interface, making preretinal vascular proliferation clearly viewable and easily identifiable.

Pivotal Studies: PANORAMA and Protocol W
Findings from the 2021 randomized clinical trials PANORAMA and Protocol W have been critical in bringing about a paradigm shift in the management of patients with moderate and severe NPDR. PANORAMA evaluated the risk of vision-threatening complications (VTCs) and center-involved DME (CI-DME) in the eyes of 402 adults with moderately severe and severe NPDR without DME and with a best corrected visual acuity (BCVA) of 20/40 or better receiving anti-vascular endothelial growth factor (anti-VEGF) therapy up to 100 weeks.4 The participants received intravitreal injections as 1) 2.0 mg of aflibercept either every 16 weeks after 3 initial monthly doses and one 8-week interval (Q16W) or 2) every 8 weeks after 5 initial monthly doses with pro re nata dosing starting at week 56 (Q8W) or 3) received sham injections.4 The study found that significantly fewer eyes receiving aflibercept developed VTCs (Figure 2) and/or CI-DME through week 100 (16.3% Q16W and 18.7% Q8W) than eyes receiving sham injections (50.4%; P < 0.001 for both).4 In addition, significantly more eyes treated with aflibercept than sham were observed to have a 2-step or greater improvement in DRSS level at 24 weeks and 52 weeks (P < 0.001 for both) and a nominal improvement at 100 weeks.4 These findings indicate that earlier treatment may reduce the risk of developing DME and PDR and may improve the DR staging in patients with moderately severe and severe NPDR. 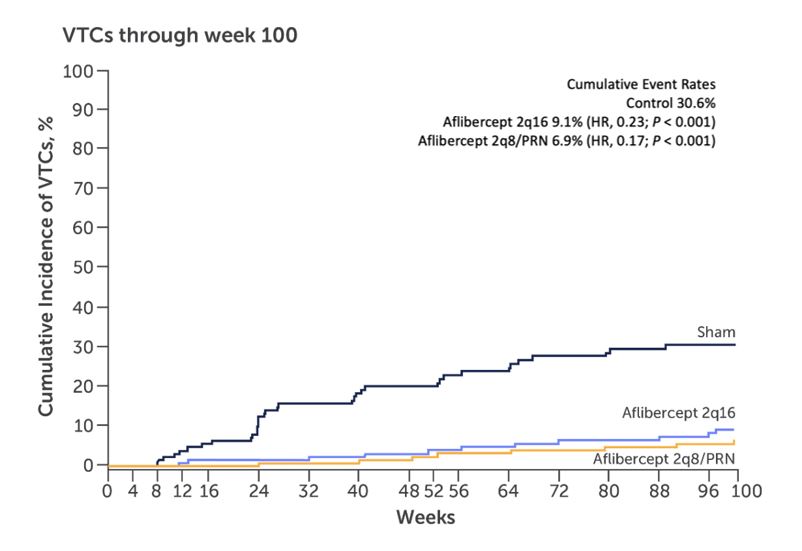 Figure 2. Anti-VEGF reduced the risk of VTCs in moderately severe to severe NPDR in the PANORAMA study.4

Protocol W studied the efficacy of intravitreal aflibercept injections in 328 adults with moderate to severe NPDR without CI-DME in reducing the risk of PDR or CI-DME compared with sham injections.5 Eyes randomly received injections of 2.0 mg of aflibercept or sham at baseline, 1, 2, and 4 months and then every 4 months through 2 years.5 At 2 years, eyes treated with aflibercept showed a reduced risk of PDR (13.5% aflibercept vs 33.2% sham) or CI-DME (4.1% aflibercept vs 14.8% sham) (Figure 3).5 Overall, data showed an 83% reduction in the risk of developing DR complications in patients receiving aflibercept.5 However, the mean change in visual acuity was not significant from baseline to 2 years between the group receiving aflibercept (-0.9 letters) and sham injections (-2.0 letters; P = 0.47).5 In the future, 4-year results will be important for assessing visual acuity outcomes over a longer term.5

Figure 3. Anti-VEGF reduced the risk of PDR or CI-DME in moderate to severe NPDR in the Protocol W study.5 y, year.

Key Message from PANORAMA and Protocol W
The new research from the pivotal PANORAMA and Protocol W trials indicates that it is critical to refer patients with DR earlier, ie, before the disease transitions to the proliferative stage. Any optometrist that lacks proper diagnostic modalities should refer patients with moderate DR to a retina specialist. Anti-VEGF therapy can stabilize and, in some cases, improve the stage of retinopathy. Therefore, optometrists have the opportunity to prevent VTCs by referring patients with moderate NPDR, particularly those with high-risk factors for progression like poor glycemic control and hypertension, for possible early treatment.

Case Study
A 58-year-old African American woman was recently diagnosed with diabetes. Her HbA1c was 10%, and her medical history also included hypertension and hypercholesterolemia. Her BCVA was 20/25 OD and OS. Fundus images showed a few cotton wool spots, exudates, and intraretinal hemorrhages (Figure 4). At this point in the examination, the DR classification was considered moderate stage. 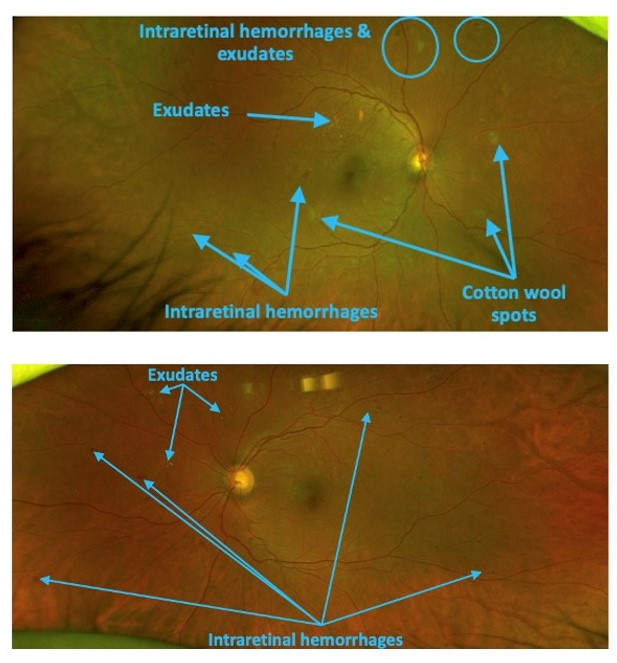 However, OCT-A imaging told a different story (Figure 5). Ultra-widefield FA showed significant capillary nonperfusion in the peripheral retina OD and an area of neovascularization OS. Therefore, the final staging based on OCT-A was severe NPDR OD and PDR OS, and the patient was referred to a retina specialist. 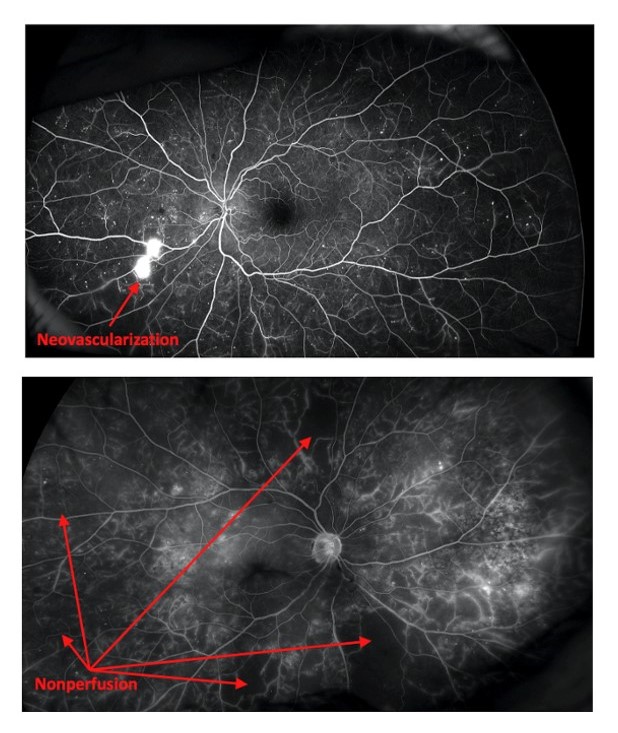 Save Sight Key Takeaways
The recent results of PANORAMA and Protocol W underscore the consideration of earlier referrals for NPDR. Accurate staging of DR is essential to best manage patients and preserve their vision. Ultra-widefield imaging, including photos and dye-free fluorescein angiography, plays an important role in diagnosing and staging DR. It also helps identify eyes at an increased risk of disease progression. By referring earlier in the disease process of DR, optometrists offer patients the opportunity to preserve their vision and even reverse their stage of retinopathy.

Catch up on the latest evidence on the management of diabetic retinopathy and how earlier referral of can reduce vision loss.

If you’ve already completed the activity.

Stay current with the best on medical education

We’re glad to see you’re enjoying Eye Health Academy…
but how about a more personalized experience?

Register for free
You are now leaving Eye Health Academy and going to a site run by another organization.

Press cancel to remain on Eye Health Academy. Press the link below or the continue button to keep going.